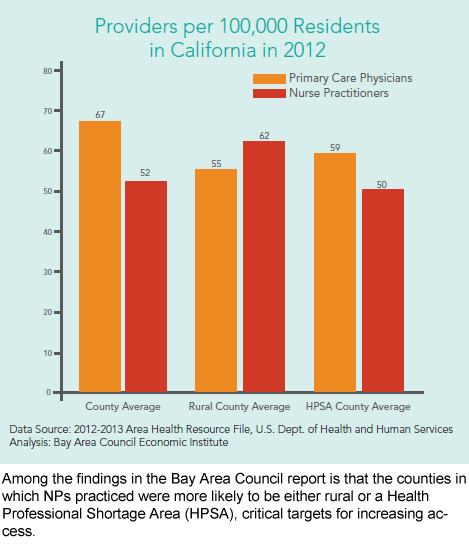 With more than 3.3 million more Californians now covered by the Affordable Health Care Act and Medi-Cal, granting full practice authority to nurse practitioners is “one of the most effective steps” California can take to increase the supply of primary care providers while maintaining high quality health care and driving down costs, according to a report released today by the Bay Area Council.

The report, funded by AARP and the Robert Wood Johnson Foundation, finds that $1.8 billion in health care cost savings could be achieved over the next 10 years, the number of nurse practitioners could increase by 24 percent, and patients in rural and underserved communities would be the major beneficiaries if California nurse practitioners were given the same practicing authorities as those in 17 other states and the District of Columbia.

“Giving nurse practitioners the ability to provide primary health care is the least expensive, most effective way to provide Californians with the health care they're seeking,” said Micah Weinberg, PhD, of the Bay Area Council Economic Institute. "California is the most populous state and has been a leader in the implementation of health reform, but the state ranks 23rd in the number of primary care physicians per resident. With the state's covered population set to rise substantially, the supply of primary care providers will become strained even further unless we empower nurse practitioners to do the work they have been educated and licensed to do.”

“It’s clear from this report that allowing nurse practitioners to practice the health care they’ve been trained for is a key to making the Affordable Health Care Act work effectively in California,” says president of the California Association for Nurse Practitioners, Beth Haney. “It’s time the Legislature realize the cost savings, increase in access, and improvement in quality that will come from changing the law to remove the barriers to practice  for nurse practitioners in California.”

The study found the number of NPs in California has seen a dramatic rise in the past decade, more than doubling from 8,240 in 2004 to over 17,000 in 2008. Nurse practitioners now represent almost 6 percent of all nurses in the state, up from 2 percent in 1993.

Along with accounting for a rising share of primary care providers, NPs also serve a more diverse and historically underserved population, the report notes. Nurse practitioners are also more likely than physicians to care for younger, female and non-white patients. They are also much more likely to serve individuals with disabilities and those dually eligible for Medicare and Medi-Cal.

The report also found that counties in which NPs practiced were more likely to be either rural or a Health Professional Shortage Area (HPSA), critical targets for increasing access.

The Bay Area Council’s analysis shows that over 4,000 additional NPs would be practicing in California today had practice restrictions been lifted in the state previously, representing a 24 percent increase in the number of NPs practicing throughout the state.

The report notes that health care quality also would increase, largely by increasing the number of annual preventative care visits patients could make. Granting full practice authority to NPs yields nearly an additional 2 million preventative care visits per year in California, an increase of 10.3 percent. “This increase in the number of primary care visits individuals will receive will allow for less emergency room use, better management of chronic conditions, and an overall increase in health,” says the report.

The report suggests that to increase access, improve quality and control costs, California should follow the lead of 17 other states and grant full practice authority to nurse practitioners.

Legislation authored by Senator Ed Hernandez (D-Los Angeles) stalled in the Assembly last year after passing the Senate. It is expected to be reintroduced next year.

“This move on its own is not a panacea. It is important to train more medical professionals, in particular more primary care physicians. And we must redesign care management to get better value for our medical spending and improve health outcomes across the board,” the report concludes.